Tablets have provided an opportunity for magazines to truly reinvent themselves. Whether an iPad or an Android tablet, these new devices allow for beautiful design, breathtaking use of images, immersive storytelling and longer pieces of prose in a way that websites don’t. However, the task of taking your magazine to the tablet can be a challenging one. Here’s a little story on one of our new Russian clients, Slon, who 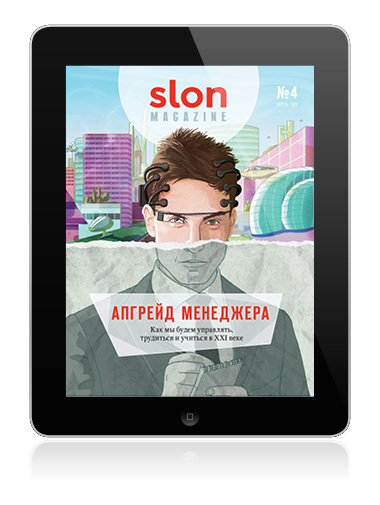 became more successful with their iPad Magazine when producing it in-house rather than outsourcing it to an experienced app developer.

Slon is a Russian business and economics news and opinion channel with 2 million monthly viewers. Among Slon’s founders are former publishers and editors from Forbes Russia, Russian Newsweek and Russia’s most influential business newspaper, Vedomosti. They aim to be a solid source of information on business, economics and politics, maintaining a critical but not contentious view.

Having experienced great success on the web, Slon decided to make an iPad magazine editon. Although three issues were published and they experienced some favorable reviews in App Store, their contractor started to fail upon delivery and, regrettably the app was discontinued. The team at Slon learned about mag+. Though they were not certain that their small team – with no development experience – could pull it off, they decided to try and create their iPad magazine in-house with the mag+ digital publishing platform.

“Overall it’s been a very interesting experience for us – it was especially eye-opening to know that a really small team can produce a modern and rather substantial magazine with a tool like mag+. Of course, we have many more things to explore: we want to make the magazine more interactive and intriguing, we will probably publish some ‘special’ issues with the best content from our web version, we may also look at paid content which is not an option right now but might be very soon”.

The Slon iPad edition has already reached 10,000 downloads. They continue to focus on marketing in hopes of increasing their already substantial download number. A big success factor comes from working with Russian, American and European thinkers and opinion leaders – including, David Remnick from the New Yorker, Janine Benyus from Biomimicry Institute and writing instructor Robert McKee. If you want to check out their magazine it comes both on the iPhone and iPad – find it here.