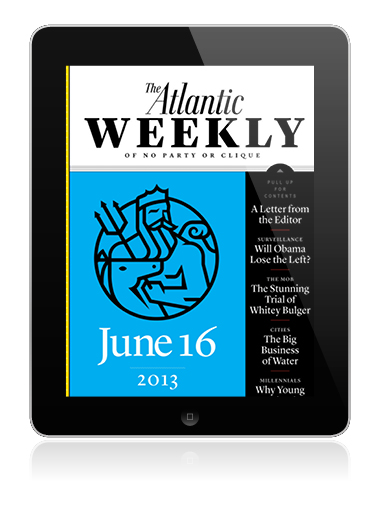 The app is fantastic, featuring some of the week’s most memorable stories from across The Atlantic’s properties, The Atlantic.com, TheAtlanticWire.com, and TheAtlanticCities.com. It also features a collection of images from The Atlantic’s daily photography blog, In Focus, as well as an exclusive selection from the magazine’s 155-year-old archive, presented as it appeared in print, in the iPad version. The first of these treasures is Henry David Thoreau’s “Walk,”  originally published in 1862.

For more about what The Atlantic has to say about the new digital publication, read editor-in-chief James Bennet’s Letter from the Editor in the debut issue.

Check this new digital magazine out in the App store. Single issues are $1.99 or you can get a monthly or annual subscription for $2.99 and $19.99, respectively.