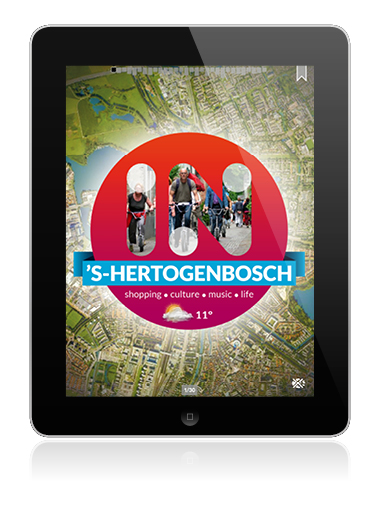 The iPad has many functions – one of my favorites is when it acts as a travel companion. It’s absolutely perfect for wasting time while travelling. Of course, watching a movie, playing games and reading is all fun, but I specifically like to use it to indulge in travel guide apps. Many companies are working on iPad app developments these days, and the good news is many have apps that are free to download.

One City Guide app that recently launched on mag+ is ‘IN ‘s-Hertogenbosch (means “The Duke’s Forest”), a small city in the southern Netherlands, 80 km south of Amsterdam. I have never been there, but after checking out this city guide, I’d love to go.

Not only is the app packed with inspiration around this versatile and colorful city, but it also gives you, as you’d expect from a city guide app, information on shopping, culture, music and life. It is beautifully designed, and has a lovely storytelling approach. It’s a perfect example of how to creatively use mag+ features.

The iPad app was developed by Liftoff, a branding and communication agency in The Netherlands. We asked Stefan van Ham, founder of Liftoff and also the concept creator and designer of this app, a few questions:

The App is a city magazine that, combined with the Facebook page, creates a promotional communications platform for downtown ‘s-Hertogenbosch. It’s aimed at tourists but also interesting for locals.

What is the background of the app – is it an evolution from print/blog?

We were somewhat disappointed with the majority of magazine apps we found out there and wanted to try to do something better. Our focus was to design it for the specific device it was going to be presented on instead of making a lame digital copy of a printed magazine. Tablet users are expecting that from publishers! We eventually decided that the city we work and live in would be the content of the app.

How did you select mag+? Was it a competitive decision?

From my perspective there are two options: DPS and mag+. mag+ is the most complete; offers a great set of unique features and has interesting, competitive pricing. mag+ is also very open to feature suggestions, and I really try to add those in when they make sense.

The app has only been live for a short time, and it’s really aimed at a small target audience. The first couple of days we had about 500 downloads (85% iPad), and we are working on getting these numbers up. We have also received a lot of media attention for the app, and that’s also worth a lot.

Get a preview of the app in video below!